So, you may have heard that a paper was recently published on the genome of a girl who lived around 90,000 years ago and was half-Neanderthal and half-Denisovan.

It kinda made the news…

Lots of people were excited, not just geneticists and researchers working with human fossils. And my favorite thing about a science story going viral is that it brings out the comedy gold:

I'm picturing a 13 year old starting secondary school and telling her new friends: "me mam's a neanderthal, dad's a denisovan, bit of a nasty shock for him when he found out." https://t.co/I4fGRZEmO2

Do me like you're a neanderthal woman and I'm a denisovan man.

To be fair, even Nature’s story on this publication was feeling cheeky: 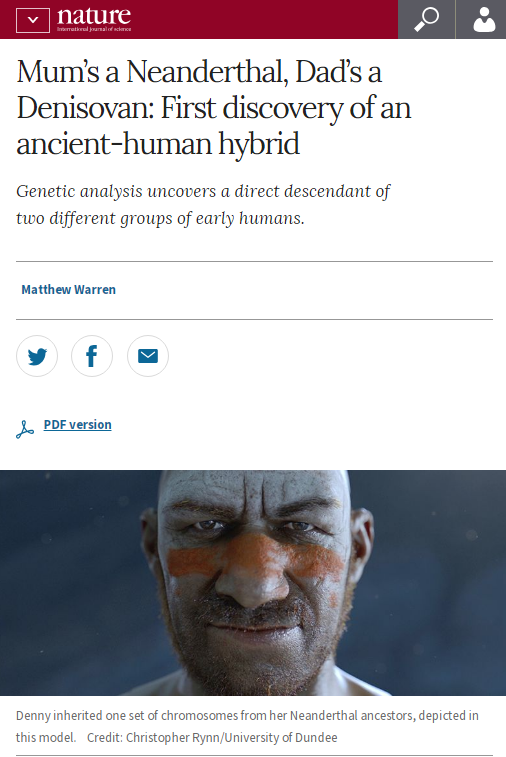 But the ultimate tweets were without a doubt the Monty Python references:

This is actually fascinating stuff, but I can't read "Her mother was a Neanderthal, and her father was a Denisovan" without hearing John Cleese's French taunter from Monty Python and the Holy Grail. https://t.co/AfthERMhSD

The Neanderthal-Denisovan ancient mashup makes me think of this. pic.twitter.com/iGTqFFCCWZ

And while the news articles that ran on this story gave a good overview of why researchers were excited about it, without the historical context of how we’ve understood human evolution until now, it can be really hard to understand just how incredible this discovery is.

So let’s back up a little bit…

END_OF_DOCUMENT_TOKEN_TO_BE_REPLACED

The first time I asked what ‘March Mammal Madness’ was, the answer I got was:

“You know, it’s like March Madness, but with mammals”

to which I eloquently replied:

Fast forward to me currently being well-versed in the US sports, allow me to explain for those of you unfamiliar with the concept of a “March Madness” (mammalian or otherwise).

March Madness is the nickname for the university-level basketball tournament that is held annually during March (and a little bit of April; see Wikipedia or your local sports encyclopedia for details).

The hype around this is that people gamble by filling in these “brackets” that predict who will win during these face-offs and advance to the next round and ultimately become the champion.

So what’s the deal with March Mammal Madness?

Well, imagine if instead of basketball teams you had mammals battling against each other like Pokémon!

END_OF_DOCUMENT_TOKEN_TO_BE_REPLACED

There was an error retrieving images from Instagram. An attempt will be remade in a few minutes.